Gardening and Yard Work in the height of summer 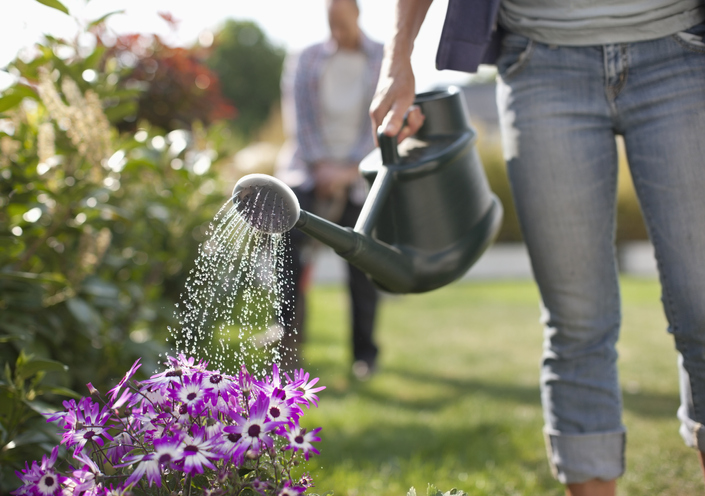 By the end of July we are more than one-third through summer on the calendar, but this year it seems we’ve had months of summer already.  And it’s been a season of extremes.

I’ll suggest specific tips and priorities for some plant problems people ask about in late July, but first it’s important for you to understand the big picture of how extreme heat, drought, and deluge (even flooding) affect plants.

Each of you has a slightly different situation in your home garden or landscape. No neighborhoods have the exact same weather—Amherst,  Hamburg, Buffalo, or the next town over. But most of you have experienced a version of this:

Too much heat and drought
In April, May, and part of June, the meteorologists referred to drought conditions or record dryness, affecting gardens. Farmers and gardeners struggled to water all they had planted, and in some cases plants or whole crops died because the roots dried up. New lawns, whether seeded or sod, had to be watered consistently and deeply for the roots to take hold. Trees, shrubs, and perennials (especially those planted in the last year or two) needed water to reach as deeply as their roots—and the water never reached there. (A tree or shrub that was planted in the last couple years might need ten to fifteen gallons of water per week.) Hanging baskets (from Mother’s Day or Memorial Day) are often the first to die, since it only takes a few days for those little root balls to shrivel up.

Is the heat the culprit? The extreme heat (several record high temperature days and weeks) would not in itself hurt most plants if–and only if—they were watered well enough. Heat, especially with wind, dries everything faster than  normal, so watering was ever more crucial.

Another downside to too much heat: Some fruiting or flowering plants rushed through their moments of beauty or fruitfulness. The lettuce and spinach bolted—became bitter and rushed to seed. It was just too much everything, too fast. Don’t blame the grower, garden center, farmer, or hybridizer for puny or nearly non-existent production: It’s all about weather.

BOX/SIDEBAR
The good side of heat
Excess heat wasn’t all bad though. Bright sunny days and hot temperatures were wonderful for many plants—if they got enough water. Many tomato plants, cannas, squashes, and daylilies—among hundreds of other species—grew bigger than ever. Plants with tropical or prarie origins grew huge. It’s all about the weather.
END BOX/SIDEBAR

Too much rain or humidity

Then the rains came—from early July onward. It ruined more than picnics. Hosta growers even saw the leaves battered with hail stones and a lot of baby plants were flattened. (Most plants bounced back after that, unless branches and stems were broken.)

While ample rain can be great for many crops and landscapes, this is the downside of too much rain:

– Flooding is tolerable for most plants for some limited period of time. A few (succulents, herbs) tolerate very little time in standing water. Some plants (Astilbes, Rodgersia, willows, shrub dogwoods) thrive in soggy sites. Most plants require good drainage or their roots rot or fail to grow. (Consults with a professional landscaper—CNLP—if you have a chronic drainage problem; go to www.plantwny.com)

– Humidity is the factor that makes or breaks fungus disease growth. Again, every single case is different, but this is the general truth about fungi:
Fungus diseases require X amount of humidity (moisture) at a certain X temperature for X time period to thrive on its host plant.

Two fungus principles:
1 – Each fungus disease is very specific about the plants it grows on. (The powdery mildew on the lilac or bee-balm won’t hurt your tomato.)  2 – Each fungus has a specific set of requirements for length and degree of humidity within a temperature range. Unfortunately, this season provided perfect conditions for a great many of them. (When you hear a meteorologist say, “Muggy out there”—it’s a good day for fungus diseases.)

Common fungi you will see this year:
Powdery mildews on squashes, pumpkins, Monarda (Bee-balm), lilacs, and many other perennials. (It looks like white powder; hose it off.)
Black spot on roses: Labeled fungicides may be used—but be sure they are labeled for this disease on roses specifically. In less humidity, with good air circulation, it is usually not so bad. Discard the bad leaves. Don’t have an all-rose garden. Many fine rose species and cultivars now are highly resistant to black spot and other diseases.
Rusts: Depending on which plant, some rusts are inevitable (on Hollyhocks, for example) and in most cases I recommend picking off the worst leaves and living with it; removing all debris in the fall.
Chestnut blight: Even the loveliest horse chestnut trees get rust-brown, shriveling leaves, by August, and look terrible. They come through it yearly, and it is temporarily disfiguring, but these trees will bloom again next year. .
Tomato blights: Too many fungus species can attack tomatoes, so you’ll need to research—Call Cooperative Extension. A few remain in the soil so rotation will help for next year. The worst disease is late blight—the cause of the Irish potato famine—and if you have a plant go down like it’s been suddenly torched: Discard it. Never allow “volunteer” potatoes or tomatoes to come back next year—the disease lives on in plant parts.
Other white clumps of fungi: Some fungi grow rapidly, in some years, on the popular shrub, Ninebark. Some cultivars get it worse than others. (I have seen it for the first time on mine, after many years with these wonderful shrubs.) Cut the infected stems out, or—counter-intuitively: Wash them down with a hard hose stream.

Seasonal effect of rain/drought on insects and other creatures

The topic is worth a whole book, but here’s the general principle: If you wonder why there are more or fewer Japanese beetles, certain caterpillars (and therefore moths and butterflies), slugs, or other pests or beneficial insects–? The answer is often the amount and depth of rain in a given time frame. Often the larvae or pupae just drown before they can emerge. (Extended drought and hot soil temperatures could also limit the success of some insects and slugs.)

The Question of the Season

Why didn’t my hydrangea bloom, or why aren’t the flowers blue?
Many hydrangeas (big-leaf or macrophylla types) are not bud-hardy here, so try covering (shrub coat type products) them next year until frost-free weather, so the buds can make it. Or buy newer, acclaimed to be hardier, ones. (Don’t prune the “sticks” off in fall or spring, until you see if they have buds.) If you buy blue ones, they are only likely to have future blue flowers in places where soil is acidic—typically in the southern half of Erie County. (For some reason, I and others have had deeply blue hydrangeas this July for the first time ever.)

Buy panicle hydrangeas—blooming in garden centers now—for dependable flowering in the second half of summer.

At Lakeside Sod and other area nurseries, you can learn so much about the wonderful world of plants. Ask the experts. Hire true professionals who know how or when to prune, water, plant, and what plants to choose. (Read John Braddell’s articles for this website about lawns. He is one of the region’s most respected turf experts.)

All of us, on behalf of this company and many others, will tell you that compost is the best cure for compacted, clay soil, and the Big Yellow Bag line of products will greatly improve your soil—or make an amazing raised bed garden for you.